Cops vs The Rest of Us: Mask Edition

Two NYPD transit cops forcibly ejected a citizen from a Manhattan subway station. His crime? Pointing out that the cops were not wearing masks, in contravention of a statewide mask mandate, and, for that matter, simple common sense and courtesy.

NYPD transit cops did what, now? 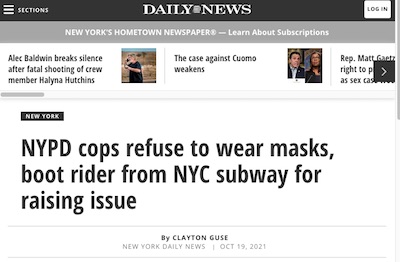 The story from BoingBoing [1], confirmed by the New York Daily News [2], is that Andy Gilbert saw 2 cops on a subway platform not wearing masks. As of 2020-Sep, there’s a $50 fine for not wearing a mask on the subay, so it’s reasonable to ask the cops what they’re doing.

Apparently one officer mockingly said he couldn’t hear Gilbert through his mask. The badge ids identified the officers as Joseph Vincent and Grace Rosero Tapia. Then Vincent declared that Gilbert was ‘disruptive’, and the two of them angrily shoved Gilbert out the emergency gate, as captured by video from another passenger shown in the NYDN article.

I’ve had police threaten me a few times for asking them why they’re parked in bike lanes, but I’ve never had any cop physically assault me. Cops don’t care about the law. They just do whatever they want and there’s no accountability.

That’s pretty much the definition of bad cop.

Fortunately, there are people taking video of police actions, which is a citizen right supported by the Supreme Court decision Glik v Cunniffe. Indeed, there’s a whole Twitter account devoted to this: @Copwatch_CPU, whose slogan is “Exposing Dirty Cops in NYC”. The @Copwatch_CPU folks published video taken by a commuter documenting the affair from another viewpoint: 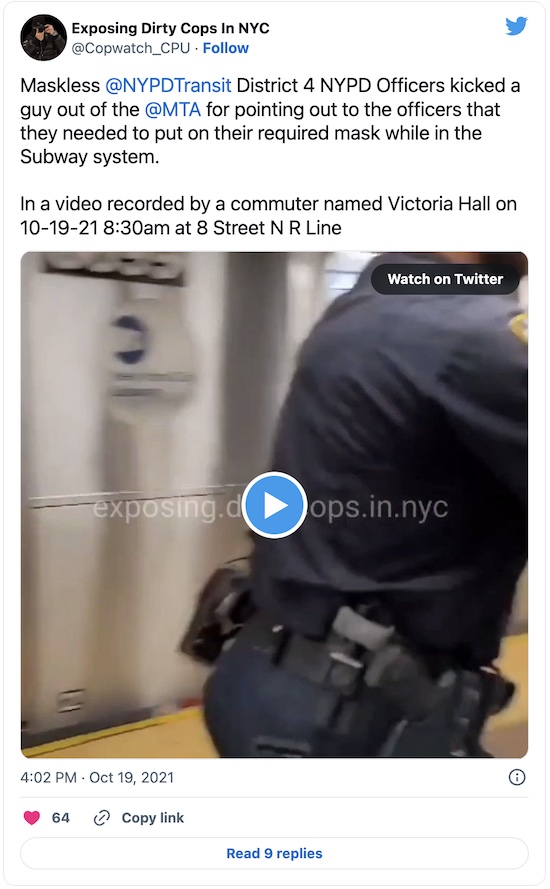 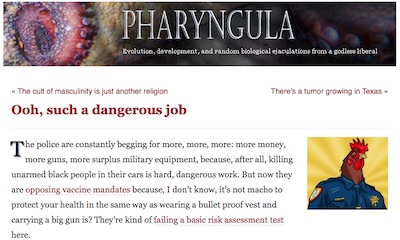 Reaction was swift, and universally negative. For example, Prof PZ Myers [3] pointed out that cops are always asking for more equipment, viewing themselves as an occupying army against citizens. It’s unsurprising that citizens resist this.

Of course we understand that cops feel threatened. They are just massively confused about what the real threat is: while their unions are busy resisting mask mandates, the main cause of police deaths is COVID-19. More than gunshot, more than anything. Resisting vaccination and resisting masks is just stupid. Resisting even talking to a citizen who asks them about masks is vicious and stupid.

Yes, “not all cops”. But the good ones need to reign in the rest. If they don’t, they’re complicit. 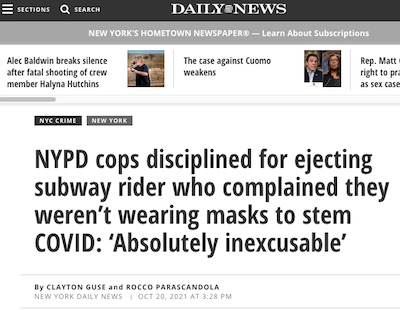 We’ve given this instruction a thousand times — if you’re going to be in law enforcement, you actually have to participate in following the law.

Unfortunately, the ‘discipline’ imposed could cost officers Vincent and Tapia ‘up to’ 10 vacation days. What do you want to bet that ‘up to’ means ‘actually 0’? I can’t see a police department in the US with their paramilitary culture taking this seriously.

What I would like to see is these 2 jokers fired and banned from police or military work for life. Oh, and banned from firearms ownership or use. I will, of course, not get what I want here.

Cops understandably feel threatened, but are confused about the actual threat

Meanwhile, CNN reports almost simultaneously [5] that the risk to cops from COVID-19 is slightly more than 5 times the risk from guns. The numbers:

So: if you’re a cop, you’re entitled to worry about your safety, but why then does your union resist vaccination mandates and masking against COVID-19 when that’s clearly the thing that is most likely to kill you?! 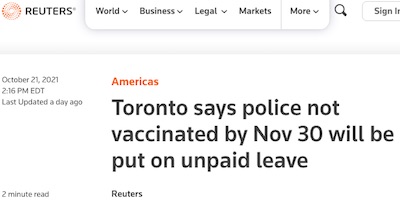 How can we do better?

Look no further than our wonderful neighbor to the north, Canada. Reuters reports that Toronto police who are unvaccinated by November 30 will be placed on unpaid leave. [6] That’s how civilized peoples behave.

Maybe the US cops who refuse vaccination are precisely the ones we want to be rid of?

A fantasy thought: could we subcontract our policing to Canada? I mean, yeah, probably not… but let me dream for a moment here, ok?

There are, of course, alternatives for dealing with people who won’t wear masks, won’t get vaccinated, and generally won’t behave like anything other than selfish barbarians. For example, from the YouTube channel “Sufficiently Advanced” (Clarke’s 3rd law, anyone?) comes a gun that shoots masks onto people’s faces. [7]

I made a mask launcher and brought it to Huntington Beach, which is one of the most anti-mask cities in southern California. What could possibly go wrong?

Well, quite a few things, maybe?

I mean… sure, it’s brilliant and hilarious. Also probably felony assault to use it on an unwilling subject. And, given the hyper-military, hair-trigger police you’re likely to encounter (good cops aside, of course), attempting to use it on a cop is likely to get you shot dead.

My maxim for dealing with police in the last few years has been to avoid them whenever possible. Yes, there are good cops. I know some of them. Some of them are even in my family. But for a random cop, I can’t tell the good ones from the bad ones, and the cost of interacting with a bad one is life-threatening. So… consider seriously the advice of law Prof. James Duane from some years ago: don’t talk to cops. [8] Pretty much no good can come from it. Cooperate where you must, but no more.

Maybe American policing will change for the better. I hope so. But in the meantime, avoid them like you’d avoid soldiers of an occupying army, because that’s how many of them think of themselves.

8: J Duane, “Don’t Talk to the Police”, YouTube channel of the Regent University School of Law, 2012-Mar-20. Yeah, ok: Regent University. I don’t have much good to say about them, maybe nothing. But his advice struck a chord with me. Maybe it’s a special-case, one-time thing, but still… ↩