Common-who built a what, now? 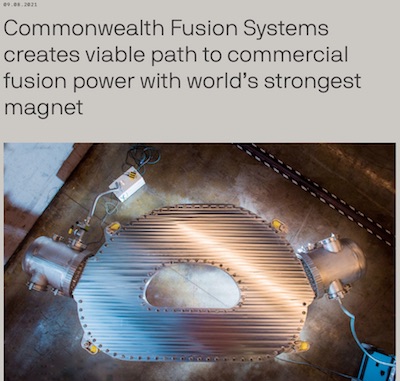 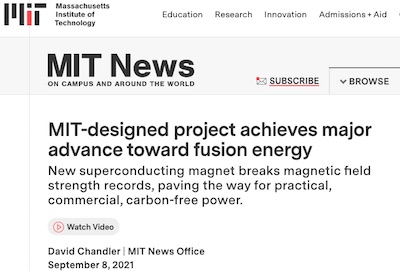 Basically, researchers at MIT and at Commonwealth Fusion Systems (an MIT spinoff) built a big magnet. [1] [2]

So what? Well, it’s not just a big magnet. It’s got some really interesting features:

Why exactly is that interesting?

The very high 20T field strength means one can attempt to build a much smaller fusion reactor. ITER in France is a bit of a monster, what a colleague described as “a Pharaonic endeavor” on the scale of the Great Pyramids at Giza. A lower field magnet would lead to a tokamak about 40x larger than the MIT/CFS design.

It turns out that the volume of the tokamak – a rough indicator of cost – scales as the inverse cube of the $\mathbf{B}$ field: $V \propto \left|\mathbf{B}\right|^{-3}$. So if you double the $\mathbf{B}$ field, you get to shrink the volume by a factor of 8. That means half the linear size in each dimension. Of course, a smaller reactor will produce less power than a big one, but at 1/8th the cost you can build a couple of them.

The MIT PSFC developed a fusion reactor based on the assumption one could have a high $\mathbf{B}$-field, and hence high plasma pressure available. That would allow considerable scale-down of size, which makes everything else less like building the Great Pyramids. ITER will run at 9 Tesla, so running at 18–20 Tesla gives running room for about a factor of 8 scale-down in volume.

It was called the ARC reactor, for “affordable, robust, compact”. [3]

The testbed for ARC is the smaller SPARC reactor [4], apparently jointly designed by MIT PSFC and CFS. It starts construction pretty much now, with the availability of the high-field high-$T_c$ magnets, in Devens, Mass (formerly Ft. Devens). It’s projected to be operational in 2025.

It’ supposed to generate up to 140MW of power in 10sec bursts. It looks like the magnets will not quench below 77°K, though they’re for some reason trying to operate at 10°K. The fusion gain, or power out over power in, is expected to be around $Q \sim 11$!

With some luck, CFS & PSFC are tenatively predicting this could lead to workable fusion power plants by 2030. That’s… very specific. Fusion has been 20 years away for all of my lifetime; I was resigned to it always being 20 years away for the rest of my life.

Maybe I need to change my mind on that. Maybe there’s hope for humanity yet in the face of hostile climate change.

I hate false hope. So, not to get too meta, I hope this is real hope.

3: Well, sort of. Oy, I can barely say that with a straight face. Of course we all know it’s an Iron Man joke, named after the ARC reactor invented by Tony Stark. (In the comics, Tony Stark of course attended MIT before becoming the billionaire playboy industrialist superhero. One need hardly even mention that.) ↩

4: I dunno what SPARC is supposed to stand for. Maybe “Shiny Petite ARC” reactor? Later: I am reliably informed that it’s “Smallest Possible ARC”. I still like “Shiny Petite” better, but… ok. ↩