Regrettably, it has come to light that my former industry has some bad actors who are funding the Republican politicians who attempted to overthrow the last election. Who are these funders of insurrectionists, and once we know their companies can we shame them into stopping?

A shame for the US biopharma sector 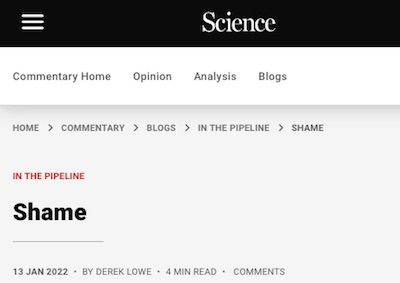 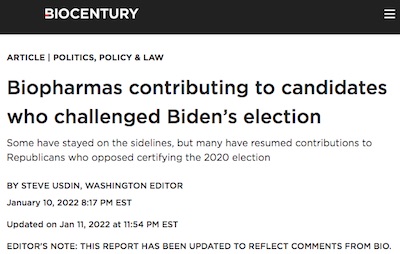 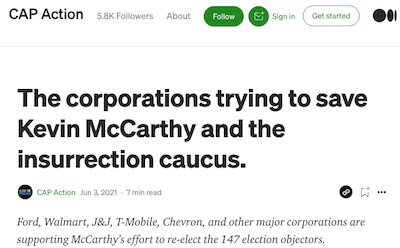 Sometime last week, I came across an article by the estimable med-chem blogger Derek Lowe, at In the Pipeline, titled simply “Shame”. [1] True enough, it is about some shameful behavior: he discusses an article from Steve Usdin in BioCentury [2] on donations by biopharma companies to US representatives (and 1 senator) who tried to overthrow the US government last year, by overruling the election results. If you think that’s unique to biopharma, consult the article in CAP Action from mid-2021 which documented how much corporate America is funding insurrectionist politicians. [3]

It’s hard to describe just how much this angers me. BioPharma scientists are among the most ethical people I’ve met in my life. [4] It’s espcially galling since many of these companies pledged not to donate to any members of Congress who voted to decertify the election… but within a few months, the dog had returned to the vomit.

Derek apparently feels the same way. It should be noted that since Derek is well to the right of me, he and I agree on approximately nothing in politics. Nothing, that is, except the execrable nature of Trump and all but a very few of the current crop of Republicans.

From the insurrection riot on 2021-Jan-06 through 2021-Nov-03, 9 biopharmas and their trade group BIO contributed to 42 lawmakers who voted for decertification of the election. (PhRMA, another trade group, has adopted a policy of not donating to candidates who reject election results. As far as anyone can tell, they seem to have stuck to it.)

Here are the donors, ranked by the number of insurrectionists they funded:

Clearly the top offenders are Pfizer, Merck, Lilly, Amgen, and J&J. I’m slightly gratified to note the absence of any of my former employers in this list of the damnable. (However, another article – reference 3 – implies that one of them did contribute to the NRCC after promising to do no such thing. See below re sociopaths in management; perhaps they prefer sociopaths in government as well.)

Note that this list is not just for Republican contributions, odious as that may be. While these organizations have also donated to Democrats, here they have made contributions specifically to politicians who tried to overthrow the election. It’s really that bad.

Who are those politicians? Here are the top few of the recipients, who got donations from more than 5 biopharma donors:

Needless to say, they are all Republicans.

It’s too bad we don’t have the amount of the donations as well. It would be good to add up the dollars and assess the influence of money, not just number of donors.

What kind of structure can we infer from the donation data?

If we think of the donor/recipient data as a bipartite graph (links between donors and recipients, but never donor-donor or recipient-recipient links), then we can begin to see some structure. (Indeed, beyond the outrage, this is the one original contribution I’m making with this article.) We took the figure from Usdin’s article, marshalled the data into a tab-separated spreadheet, and wrote a little R script to plot it as a bipartite graph [5], shown here.

Both conclusions are in accord with what we saw above in the tables, we just see it graphically here.

I dunno what to say, really.

I’d dearly love to see us attempt to apply the 14th Amendment of the US Constitution, adopted after the Civil War, which says in part:

Why are these guys still members of Congress? Haven’t they, in the words of the 14th Amendment, “given aid or comfort” to insurrectionists?

It seems like the right wing is so amazingly full of crap, they have to export it onto the rest of us.

What can be done here? Any ideas?

3: CAP Action, “The corporations trying to save Kevin McCarthy and the insurrection caucus”, CAP Action, 2021-Jun-03. ↩

4: Though I grant that management has its share of sociopaths and sales will always try to do something shady if they’re not watched.

Hence every year we all had to take the usual inane HR training that the things you think are obviously crimes, are in fact crimes. This was all because some idiot tried to bump his sales numbers, got caught, found guilty, drummed out of the industry, and left the rest of us with 10 years of annual training.

This made scientists furious. ↩

We have aggregated the figures in Lowe and Usdin’s articles, collecting the donors and recipients into a tab-separated spreadsheet which is available for download and review.

Also, after running the R script, there is a text transcript available for download and review. ↩