Bayes Rule vs The Millionaire Next Door

Somebody asked me (back in 2012!) about the famous book, The Millionaire Next Door. It’s good as far as it goes; it just doesn’t go nearly as far as almost everybody thinks!

The Millionaire Next Door 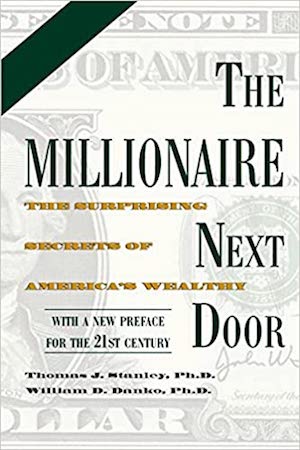 In 1996, Stanley & Danko published a now-famous book which amounted to an empirical sociological survey of people in the US who were millionaires: The Millionaire Next Door. [1] To say the least, it struck a nerve. The empirical data did not confirm the stereotypes of expensive clothes, cars, and jewelry. They did not live in large houses. They were not lavish spenders.

Stanley & Danko quoted the astonished words of a VP of a bank trust department [2]:

(Keep in mind this book was published 25 years ago. A million dollars in the US was significantly more money back then! According to the Bureau of Labor Statistics CPI inflation calculator, a million in 1996 is about $1.7 million in mid-2021.)

The main results of Stanley & Danko are:

They derived a jargony formula, for determining “average accumulators of wealth (AAW)” and “prodigious accumulators of wealth (PAW)”. Basically, for an AAW your age times your income, divided by 10, should be about your net worth excluding inheritances. A PAW should do about twice that. Here are some R functions to help you explore that:

I once realized these could be worked backwards: given your age and net worth, what income would a PAW need to achieve that? If your income is lower, congratulations: you’re accumulating net worth even faster than a PAW. If your income is higher, figure out where you can spend more efficiently & save more.

What’s wrong with that?

So that’s… fine, I guess? It’s nice to know that the people in the upper middle class and the lower end of the upper class seem much more down to earth than the sociopathic billionaires. (I just made an interesting typo: “villionaires”, perhaps a portmanteau of “villain” and “billionaire”? Hmm.)

What got people’s engines revving, particularly those of the more feverishly conservative or libertarian sort, was that apparently 2/3 of the millionaires interviewed were owners of small businesses. “Aha! That’s for me,” they thought, “I’ll start a business and get rich!” They always think business owners are the saviors of society, and seized upon this as though it were empirical evidence.

First, the book is an empirical survey of people who are already millionaires. It is not a survey of the sorts of people who become millionaires and the ways they do that. It does not talk about all the people who resemble the interviewed millionaires but failed to become rich through bad luck, poor timing, isolated geography, or anything else.

Second, the misunderstanding betrays a fundamental ignorance of statistics. Stanley & Danko asked: if we sample millionaires, what sort of people are they? The fever dream people were doing the reverse: if we sample people of a certain sort, are they likely to be or become millionaires?

So there’s nothing at all wrong with Stanley & Danko’s book: it’s fine, as far as it goes. It just doesn’t go where most people think it goes!

Letting some air out of the balloon with Bayes Rule

We can show this, with some slight degree of melodrama, using Bayes’ Theorem.

Stanley & Danko’s research demonstrates that if you sample millionaires, you’re likely to find that about 2/3 of them own a business: 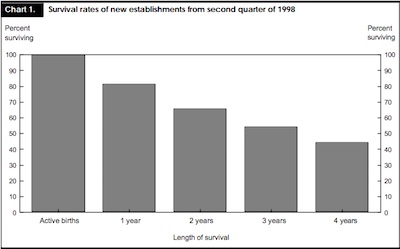 The truth is, most businesses flame out early: the US Bureau of Labor Statistics says about 55% of businesses die within 4 years. [3] So there is some danger here! 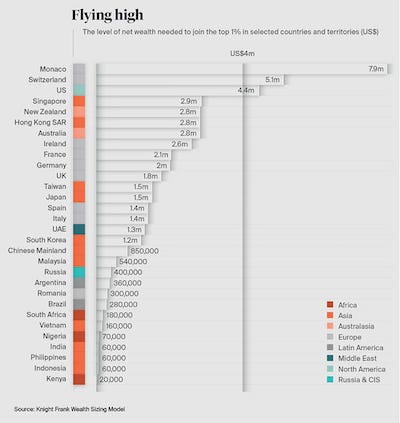 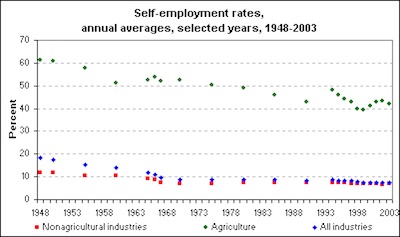 So here’s what we know:

Plug that into Bayes’ Rule above:

So basically, if you think owning a business is the road to riches, you’re thinking about a road with only an 8.3% chance of going where you want to end up! Ok, sure, that’s more than the 1% chance you’d have if you started at random, but 8.3% is by no means certain. All it says is that the business class is “enriched for richness”, not that starting a business will make you rich.

Perhaps someone will point out, as someone always does, that the top 1% of the US is a bunch of evil super-villain billionaires. I mean, that’s factually false, since the data above says the entry threshold is $4.4 million, not a billion! (But see below: the 1%-ile threshold may be almost 3x higher, using different datasets.) But let’s indulge this theoretical critic, since critics are the most valuable friends an idea can have.

Instead, let’s just say the target for “rich” is being in the financial top 10% of the US. Surely that’s pretty comfortable? Wouldn’t we like to know if starting a business could at least raise the chance we could be comfortable?

Let’s see if that’s a possibility:

Now there’s something to talk about: you get a 50% shot at being in the top decile of wealth. You’ve quintupled your chances.

Of course, there are other ways: get a good university degree perhaps in a STEM field, perhaps get an advanced degree, work in an industry that does some good in the world, live below your means and invest the difference. At retirement age, you’ll be comfortable.

We’ve examined some popular sentiment about Stanley & Danko’s The Millionaire Next Door. As an exploratory study in the sociology of wealth in the US 25 years ago, there’s nothing at all wrong with it. Good work.

It does not, however, imply what many people think: owning a business is not a road to riches. The path to success there is only about 8.3%, after a Bayesian analysis. However, doing anything productive with your life, and then sustained over time, with reasonable spending budgets and intelligent investing… will likely have a good outcome.

There’s no magic here: you don’t have to be a business owner. You do have to be productive, patient, and reasonably able to budget. 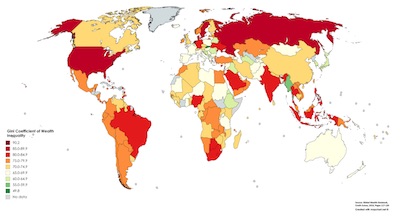 The claim that $4.4 million was the threshold for joining the 1% in the US just sticks in my craw a little bit. We’re so desperately unequal, with a Gini coefficient of 0.9, worse than in the Gilded Age, that I find this hard to accept. Maybe it’s time to look at a second data source. 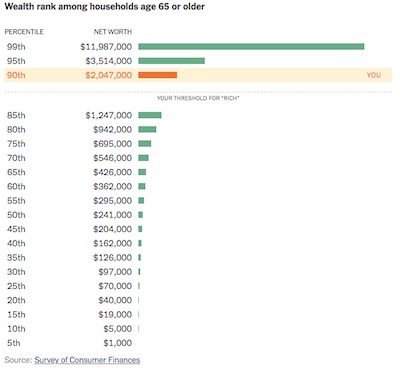 That confirmed a couple of things:

So the calculation above for the 10%-ile is more relevant to Stanley & Danko’s work than the 1%-ile, who are über-wealthy. It doesn’t make sense that there’s any recipe for being in the 1%-ile, since they’re largely the result of inherited wealth or lightning-strike levels of good luck. But it does make some sense that sensible kinds of work (start a small business, or get a STEM degree and work in a productive industry) sustained patiently will reward one with entry to the top decile, or near there.

3: A Knaup, “Survival and longevity in the Business Employment Dynamics data”, Monthly Labor Review, 2005-May. ↩