The Shame of the Anti-Vaxxers

The shameful behavior of the anti-vaxxers has reached intolerable levels. It’s been extremely bad for a while, but now they’re picking off prominent scientists and public intellectuals with death threats. 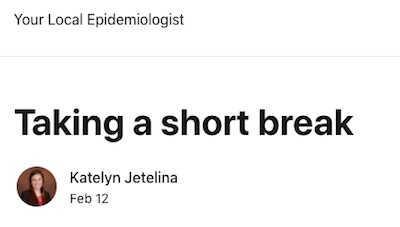 We all know by now that the anti-vaxxers are knuckleheads. They also, like most right-wing manias, have a streak of barely suppressed violence. This week came 2 examples where they have been threatening physical violence upon the families of scientists, in this case Katelyn Jetelina of Your Local Epidemiologist, the University of Texas Health Science Center at Houston, and the University of Texas Southwestern Medical Center [1] [2] (and of whom we are fans on this blog).

The Medpage Today article chronicles just how many millions of dollars are being directed into the coffers of purveyors of anti-vax disinformation, and the extreme lawlessness to which they are willing to resort to defend that money. Jetelina said of this state of affairs where we funnel money at people who lie and disrupt:

… is risky and I hope there’s recognition in that. Not only risky for the health of our population but risky for the personal safety of me and fellow scientists fighting disinformation every day.
…
My life and the lives of my family have been directly threatened throughout this pandemic from followers of this disinformation … And we’ve had to take certain steps to ensure the security of my family. The threat is real and it is scary. It is also incredibly exhausting and I’m tired.

So on her blog she says the combination of deep funding of destructive anti-vax sources combined with actual death threats for her and her family has led her to take a break from blogging:

Taken together, the death threats are more serious. The microaggression is deeper. And the punches are coming from every angle.

So, I’m taking a break for a week or two.

So she’s “taking a break” from the thuggery. I hope it’s in a location that’s a well-kept secret with good police protection. She deserves some safety at the very least.

The anti-vaxxers, on the other hand, deserve shame. And criminal prosecution for some of them.

Part of me wants the anti-vaxxers to be taken out and shot. “Shot” with a vaccine, of course, because that’s just poetic justice.